Hey you guys, I think most people (rightfully) forget the card system exists unless there is a hot event for it. It's not exactly the most exciting thing ever patched into the game, but I think it's worth going over how card bonuses are shared in group situations.

I use Group Arena as an example here, but I'm pretty sure this applies to Spire and Multi-player dungeons as well.

It's generally understood that cards give stat boosts, and as you level up your cards, they will give more bonuses. If you're lucky enough to draw purple cards, you'll open a bonus for having 4 cards (including white, green, and blue which are easier to get) of the same deck. The 4 card bonus for the Multi-player (Group) Arena cards gives +3 Insignias for every fight (win or lose). 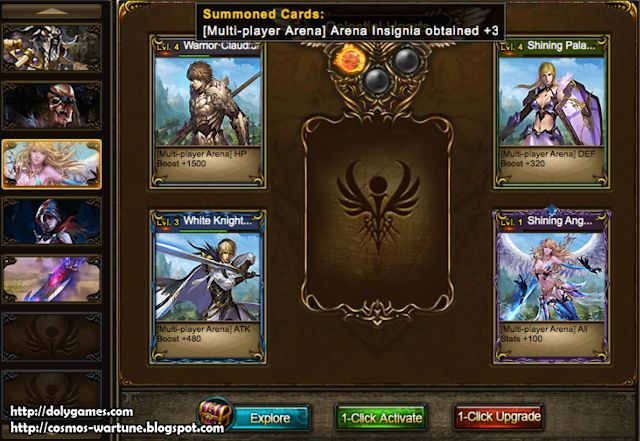 What I think goes less noticed about the card bonuses is that they can stack if more than one person on a team has it. And since Wartune could never be so straight-forward, there is a very specific way that the stacked bonuses are counted.

Should we be playing a simple, logical, not-buggy game, if there are 3 people in a group arena team that have the card bonus, then everybody on the team should get 3 x 3 = 9 extra insignias per fight. However, that's just not how it goes.

For example, in the picture below, Ballwin, Eliatan, and Avarice have the card bonus, and artemes does not. That means Ballwin gets +3 (only the bonus from his own cards); I get +6 (Ballwin + my bonus); Avarice gets +9 (Ballwin + Elia + his own bonus); and artemes also gets +9, since the three before him have the bonus, but he does not. 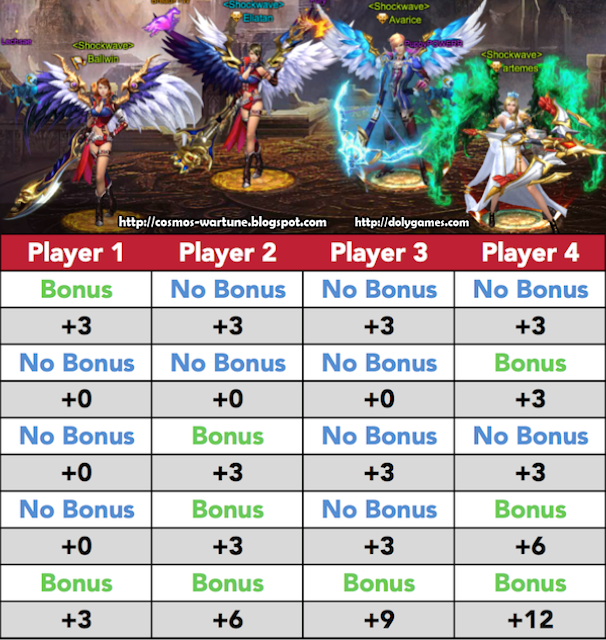 Here I include a table of some example situations. What you want to make sure of is, if only one person has the card bonus, then that person makes the room and invites everyone else, so at least everyone gets a little something extra! :)

I hope this helps you guys out if you didn't know about stacking the bonuses, or if you've noticed that they do and didn't know exactly the counting method. I don't really pay attention to the stacked card bonuses in the other activities, so if you have proof of them in Spire and MPs, tell us in the comments! Please share and let people know about this little tidbit ^^