Use Wartune Events to Your Advantage

Hey guys, so I want to talk to you about using Wartune events to your advantage and maybe also not being afraid a little. Recently we had a 3 day event about upgrading gems and I must say I always fell into the trap of only synthesizing gems from my bag and usually I didn't have enough for those high level 6 and level 7 gems. Level 6 I could  make sometimes, but forget level 7, I never even considered that. Until....

Until I was chatting with my guildies and I overheard that someone synthesized their own gems, I mean the ones they wear on their equipment just to make level 6 and level 7 gems and so most of their equipment was actually left with small level 2 gems, which we were laughing about.

I thought about this and actually i believe he was right in doing so because you not only get a higher level gem, but also the big rewards from the event. And yes, sure, for a while, and it could be a month or more you will have to make do with weaker gems on your other equipment until you can raise them up again, but I do believe it is well worth it and also because....

...we have other events where you can get even more rewards. So here for example you get lots of soul crystals as reward and gathering enough of these will allow you to get bigger rewards during the soul crystal events which come sometimes just like the time where I used my 12,000 soul crystals and got my nice Frost Lion mount and also lots of Mahras.

So here below a screenshot to show you how I redeemed all the gem rewards and got my first ever 2 level 7 gems. Yes now my BR fell a few thousand because of the low level gems i now have on other equipments, but this is temporary and I am happy about this! :)

Bear in mind that I bought the transmute formula with locked balens only for 1 gem and I had to spend a couple of million gold to convert back and forth to get the PATK gem (i bought the formula for MDEF). 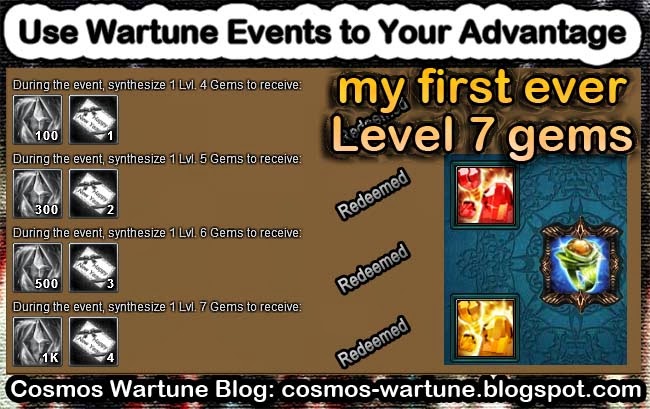