Hey guys, here is a long post - introduction or a first look / review of the China Wartune 2 called now Divine Comedy 2 by Cookie:

OK. Here we go. Let’s see whats new and different on the Sq.7road.com server in China.

Firstly, the name of the game. It used to be Divine Comedy, but now it’s Divine Comedy 2, so they obviously think they’ve changed it enough to make it a “sequel”.

They have a helpful sidebar with links to different tools etc. One of them showed this which I thought was of interest. 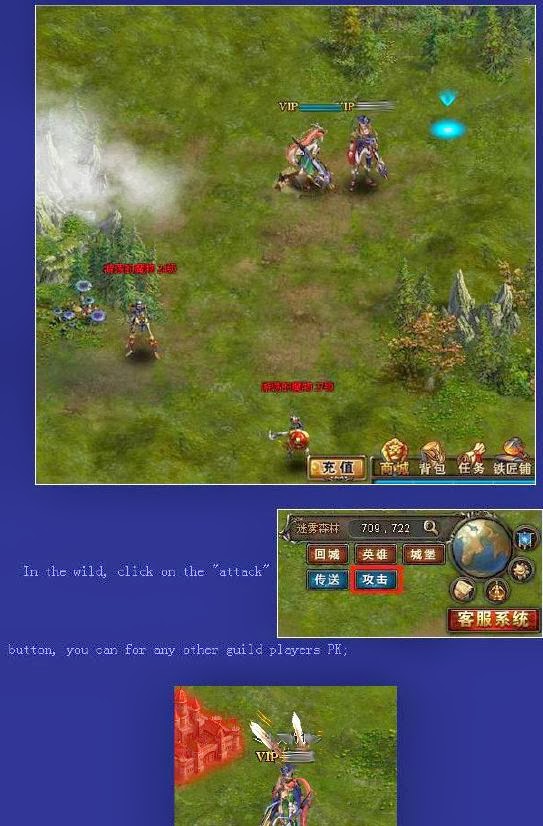 You can now battle other players in the wild.

Right, into the game itself. Started as mage (probably shouldn't have as I've never gone a mage before so I don’t know what’s different). 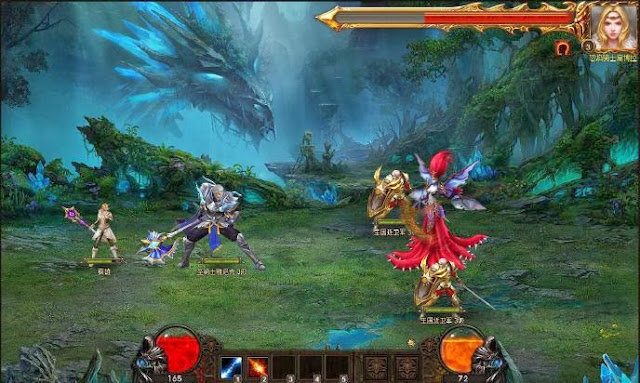 This is the 2nd battle within the opening story. Big guy appears out of nowhere to help (yes, I’m the little one on the far left). No idea what’s going on? All “commentary” is in Chinese obviously. 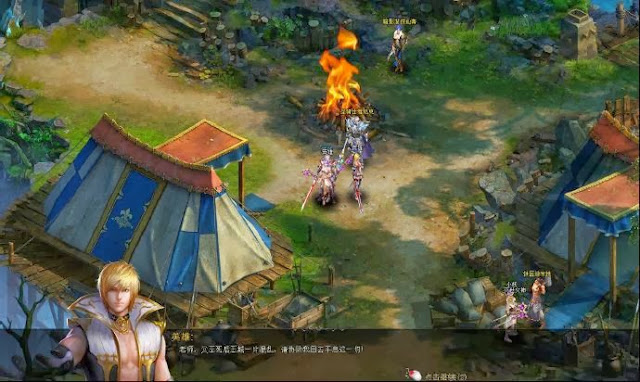 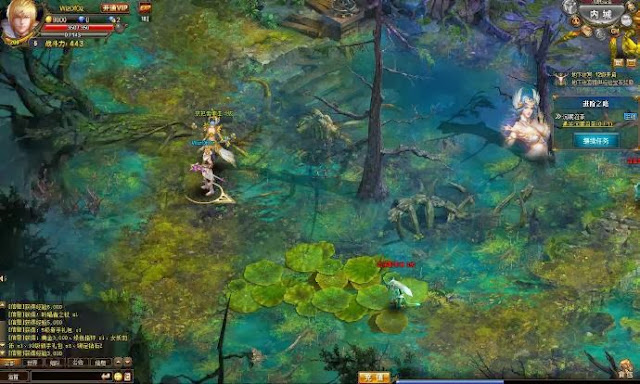 First intro “campaign” (controllable). Part of intro story but you can see it’s a campaign map. Notice the new quest list look(very nice). New monsters. New music. New animations for attacks. All seems to be little touches to improve the look and feel of the game.

I opened the inventory and it looks the same. Let’s look at the skill tree : 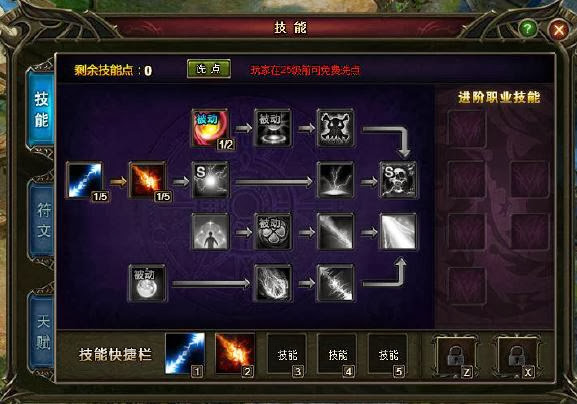 Mage skill tree (is this the same?), but notice 8 more slots grayed out off to the right. Hmmm. I thought it might be for the runes, but there are still the 3 tabs on the left side (unless there’s something else coming) 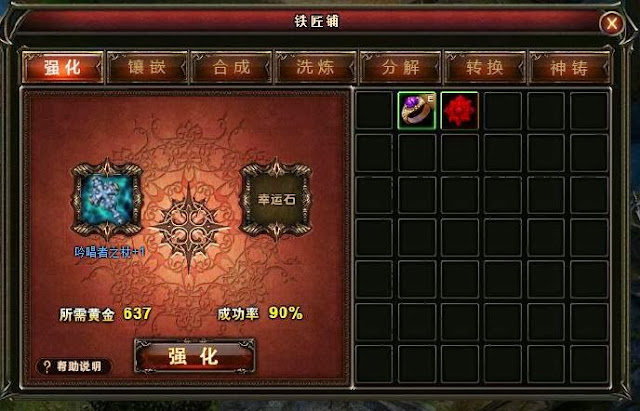 Blacksmith looks similar but clicking the tabs shows the level you need to be to access them. Tabs 2 and 3 (probably socket and synthesize) open at lvl 15. Tabs 4,5 and 6 (probably refine, recycle and convert) open at lvl 19. But there’s a 7th tab not in our version. Opens at lvl 80! Please can someone translate :)

OK. Now for a screenshot from another part of the intro story. I’m going to start clicking the icons in the top right and see what they are : 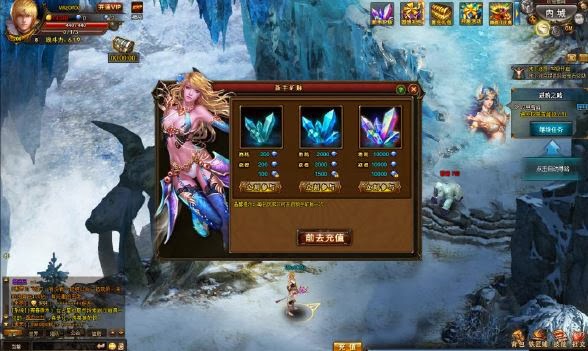 1st icon – looks like crystals.
No idea. Guessing it’s a buy some sort of crystals for Balens window. 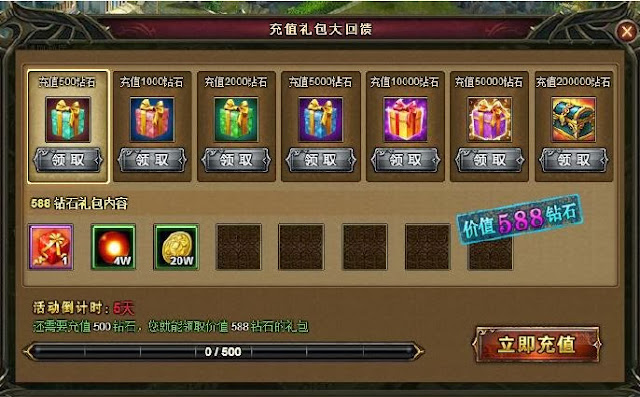 2nd icon – purple gift.
Er...get presents for something that levels up (through Balens probably). 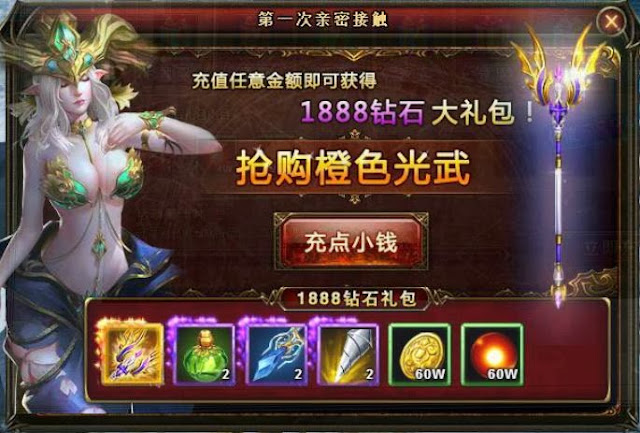 3rd icon – treasure chest.
Looks like the special offer window. Same as ours – get free stuff if you spend, spend, spend. 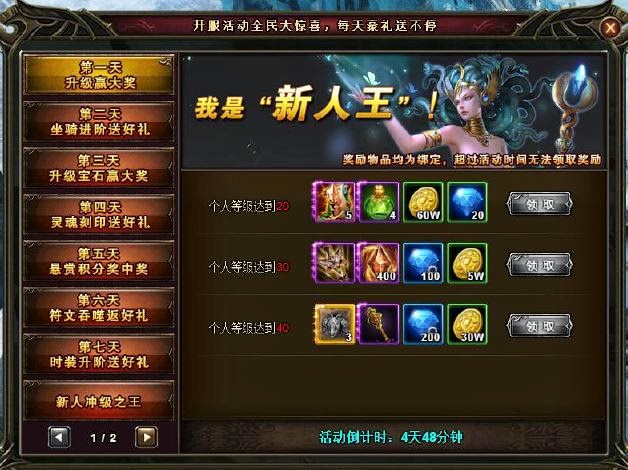 4th icon – blue gift.
No idea what this is looks like events but that’s the 5th icon?! 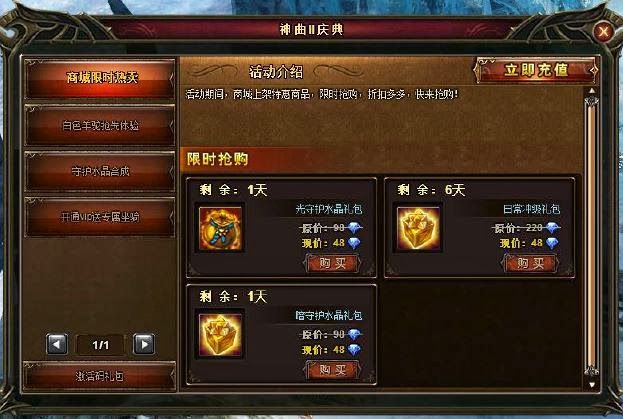 5th icon – Hot Events.
Guessing by same icon it’s the events window. It looks similar. The first tab shown here is different though, looks like “Hot” tab from shop. The other pages are the same as ours.

Back at the camp I reached level 10 and was awarded with a VIP token (the one you can dodge if you refresh the page, but I just used it). So, let’s have a look at the VIP window on 7Road. 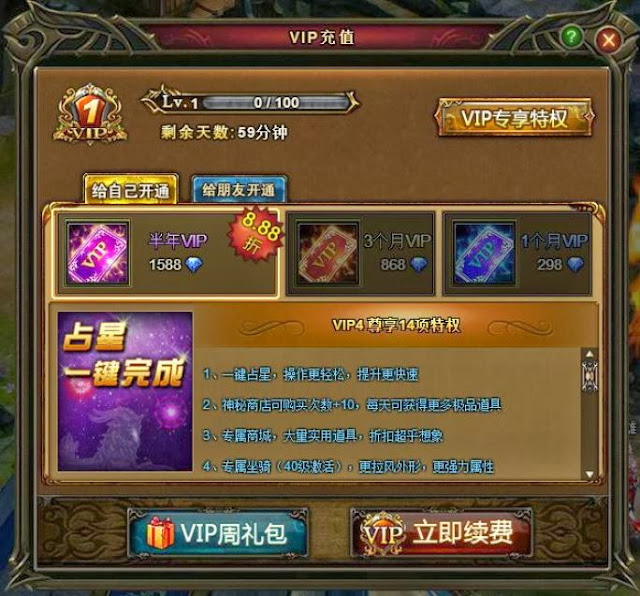 I’m guessing they are the things listed in our VIP screen under VIP benefits/level comparison. We have 19 things listed though so I wonder if they have merged some or removed them.

Maybe you can buy into our VIP levels rather than earn them through time as on our servers. Who knows?! 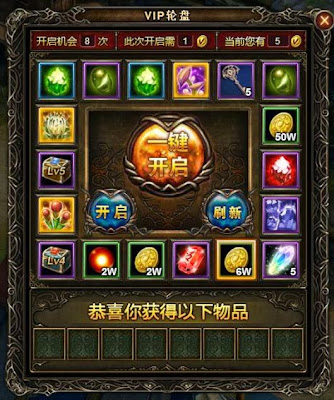 VIP Wheel looks pretty much the same (big button is spin once, bottom left button is spin all and bottom right button is refresh). I refreshed it about 10 times to see if there was anything new. It looks like there isn’t. I span a couple of times (with the limited tokens I had) on the 20K, 60K, 500K gold setup (shown as 2W, 6W and 50W in China) and the 20K came in on the 2nd spin. So looks like the same “fixed” spins as now. 20K on 1st or 2nd spin, 60K on 4th or 5th spin and 500K on 7th or 8th spin. Rubbish in between. (Obviously I’m presuming a lot here from 2 spins).

OK. Almost at the end of the intro story stuff. You get on some sort of flying beast and off you go... 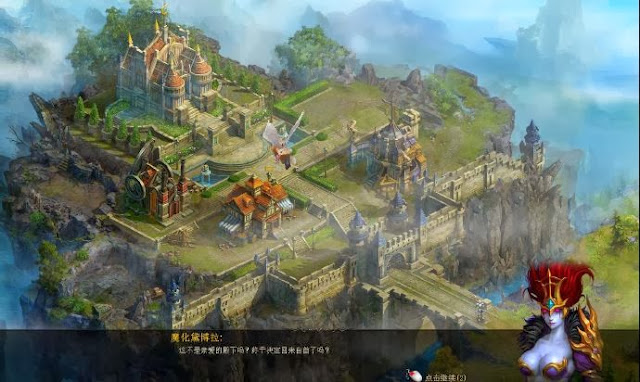 Flying into my city (yes that’s me in the middle)! 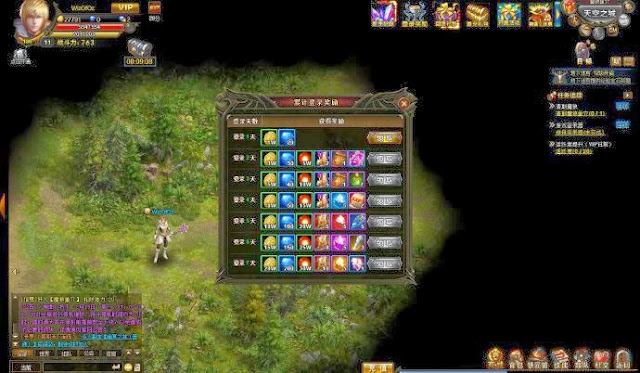 OK. This is the first proper campaign map. Strangely similar. They’ve gone back to the original quest look, even though it changed for the intro story. Plus it’s the same monsters again. Sigh. I think they will change it throughout in later patches though.

In the middle of the screen is the new player online bonus window (2nd icon in at the top right – looks like a chalice). It looks like they get better stuff than we do, surprise, surprise. Have a look at all those sweet Balens! (And another VIP token!)

There’s nothing new to note in the campaign, except maybe the lack of AFK. I can’t remember if that comes in later.

But, on the 2nd campaign I went into a lair to see if you still get the troops card that I find useless and always sell. Not any more, I got a card that looked like a character (rather than a monster), so I used it, went to troops and there weren’t any new ones spawned, but . . . back in the campaign, my character was now glowing blue and flashing on the screen. It must be a buff of some sort. Maybe the Pandora’s’ box has gone and you need to do the lairs to get a free buff (although it stayed with me AFTER the campaign) and showed up as an icon in the buff icon section next to your character in the top left. Buff lasted for an hour.
OK. Back to the city, some more buildings have opened up so let’s run through them. 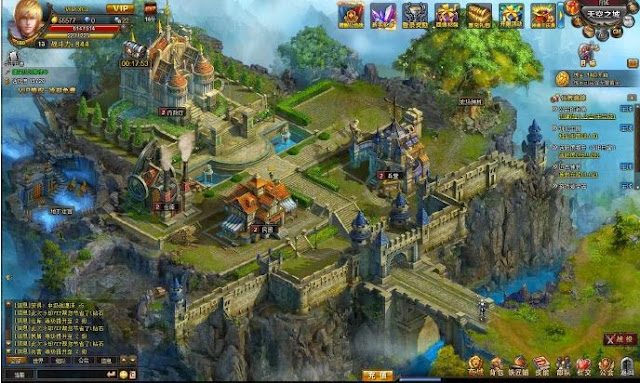 All new graphics, but what else has changed (when clicked)? Top is the town hall, then sweeping from left to right is Forgotten Catacombs (same), Warehouse (same), Cottage (same), Barracks (same, and same troops :(  ) and Tree of Ancients (differences shown in next screen shot).

The first new icon at top right of screen is, I believe, the new guild battle info screen. It’s been updated, but I’m not bothering with a screenshot as it’s all in Chinese and mostly writing.

There’s also a shield with arrows sticking out of it just above the quest list (and they’ve move the full screen icon there too). The shield icon appears to be a shortcut to jump to campaign, barracks, guild, etc. Not sure, but that’s what happens when you click on things in the popup window. 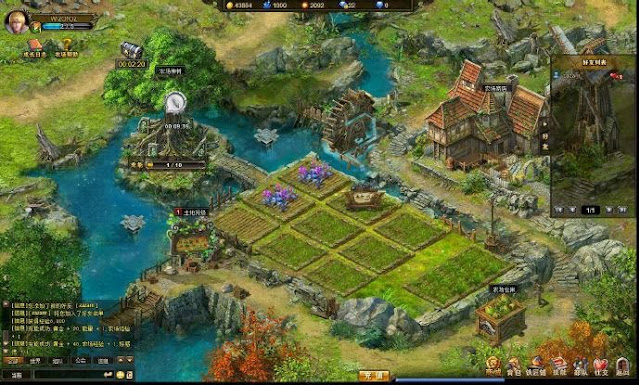 Farm now has a large plot at the end. Interested to see what that’s for. 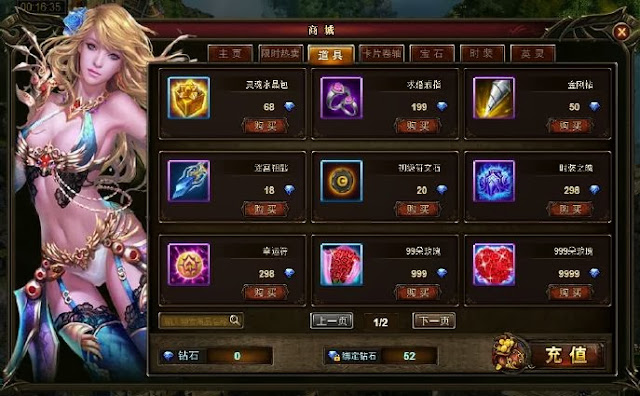 Here’s the shop. Apart from the ridiculously low prices (50 Balens for a socket rod :(  ) there's no new layout or anything (they've still got the bug on the clothing tab where all the tabs move to the left), but . . . 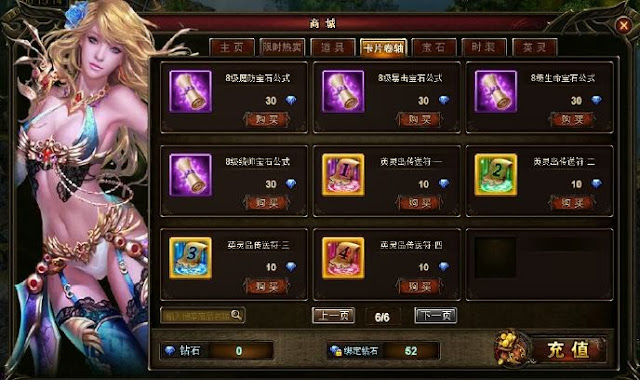 What are those numbered scrolls? Sigh, 30 Balens instead of 295 for Lvl 7 gem transposer, although they don’t have levels 8 and 9 for some reason :(.
And... 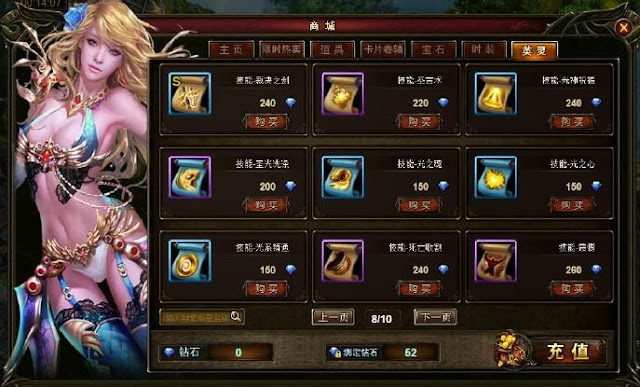 10 pages of sylph skills! Going by the skill colours on the scrolls (blue for Iris, green for Pan, etc), I think there is 6 different sylphs in China.

OK. Well thats my run down of the start of “Divine Comedy 2”, the NEW(ish) Wartune on the 7 Road servers in China. More to come if I get time.

Hope you found it interesting.