A few weeks ago, a couple of people in my guild asked a question. "How much gold do you need to spend to get 1k star points?" Having a B.S. in mathematics, I jumped on the task of finding out on average how much gold you would need to spend in order to gain 1k star points. If you're interested in the math behind this little project, then continue reading. If you really don't care then look at the second image and skip to the end for the results.

The first step to doing this was to accumulate trials. So everytime that I went through the motions of clicking on those little orbs to capture astrals, I would keep track of how much gold I started with, and how much I ended with, along with how many star points I gained from that run. As a note, I was selling green and below and feeding blue and above. 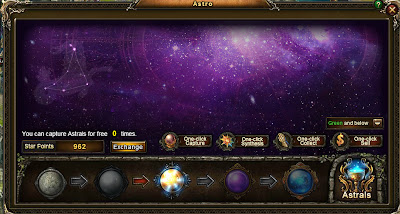 While that would seem simple enough, I took it a step further and kept track of how much exp I was gaining per run as well.  The image below is the excel spreadsheet that I kept for this little project. I'll walk you through the calculations.

The far left side of the picture should be pretty self explanatory. All it is are the trials that I did (total of 25) and how much gold I spent for each trial, how many star points were gained, and how much EXP was gained from that run.

I then calculated the average gold I spent per run by summing up all the gold dumped into doing astrals. That number was then divided by the number of trials I did (25) and that's how I got that number. The same process was done with the star points and exp gained.

So the results are as follows.

Now these numbers are also averages and reflect the data that I collected so don't expect this to happen every time. Astrals have a lot of variance behind them and this was a simple estimate that I could get without having to do insane statistics calculations.
Posted by Unknown at 5:25 PM