Hey guys, this is going to be an awesome guide on the importance of sylph type selection, which could totally change the life of your Wartune character! :)

As my punchline on the picture says:


"When a purple Hercules fails...
...A white Amazon succeeds"

I must admit I was generally in the more lazy camp of people thinking that if I just make 1 powerful sylph I can use it everywhere. For me this was Gaia, later renamed into Eve, which got evolved into Hercules. My Hercules sylph is indeed really strong and supports me 95% of the time and, as a knight, I am happy with him. BUT!

The problem with any specific sylph is their element. The way the game is built, especially the 4 free sylphs, Iris/Water, Pan/Wind, Amazon/Fire and Gaia/Eve/Electro, have one massive weakness in their resistances. The weakness usually goes up to -200, which makes them especially vulnerable against that sylph element.

The traditional "casher" sylphs, i.e. Hades/Dark and Apollo/Light are much better in this regard, but instead have a weakness versus each other.


The Importance of the Element in Battle

This becomes a major issue when you fight your weak element in battle, which could be in both PvP or PvE situations. For this guide I will focus on PvE - God's descent example to make my point / explanation.

So in this example, God's Descent level 13, I had to fight a Wind-based boss and I passed all the previous levels just with my Hercules. My Hercules is level 80, purple, 1 star - a more than decent sylph in terms of power. But the problem is I kept failing and was not able to beat this boss. One of the major problems was my weakness to his attacks (-200) and his resistance against my Electro element.

But actually my character was able to win this if I did the smart thing. And this is usually the case for everyone - you fail because you are doing something wrong while you actually have all the tools you need to win, but you simply don't see that at that particular moment (and this is very often also true in real life by the way...).

So I thought a little bit and I thought "Could it actually work?". What I mean, of course, is that at that moment I thought might I actually succeed with a spanking brand new white star Mr. Nobody Amazon when my 1-star Purple evolved Hercules fails. As you might know, once you have an idea it's really hard to get rid of it, so I went to the sylph atoll to quickly farm myself a new Amazon since i had none. 60 essences later - behold my newbie-mazie-boo was born. A couple of sylph exp scrolls bringing her to level 20ish and off I go to meet my doom in the level 13 of God's Descent.

And guess what? I won! Why? Because that Wind Boss had -200 (or very bad) resistance against Fire, so my changing my element not only my sylph attacks were strong but also my regular attacks as they became Fire element. Furthermore, my -200 weakness versus Wind disappeared as I inherited newbie-mazie-boo's resistance to Wind, which made me receive less damage.

So there you have it - respect the Elements in Wartune! Try to get any color sylph of each element and level them up to level 80 (don't have to invest mahra and sepulcrum). Help spread this info to your Wartune friends or guild pages. 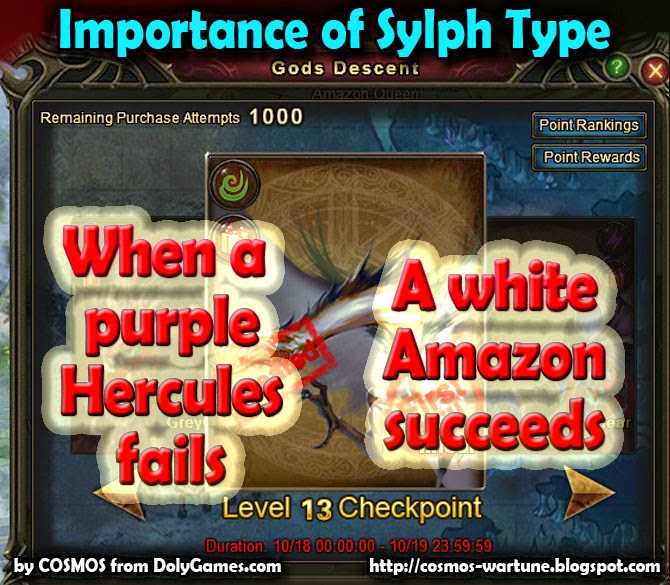