Hey guys, after spending 71 million daru (auch!) I managed to upgrade my PATK level 5 troop enlightenment to level 6 which means going from a 7% bonus to a 9% bonus on the PATK (picture below).

So this additional 2% is, as you can see, giving me PATK going from 16783 to 17025, so an additional 242 PATK which is not huge, but as you know every little thing like this adds up to a big number, so it is definitely important.

To answer the question about "WTF?" where do you get so much daru - it is mostly from the World Boss event although daru income from all the various places does add up. For all sources of daru search my blog for the daru guide I have a post all about daru.

The troop enlightenment cost keeps going higher and higher and so for the next level 7 it is beyond 100 million daru and then up and up, so World Boss income is truly important, yet again favoring hugely archers and then mages and a big problem for knights. 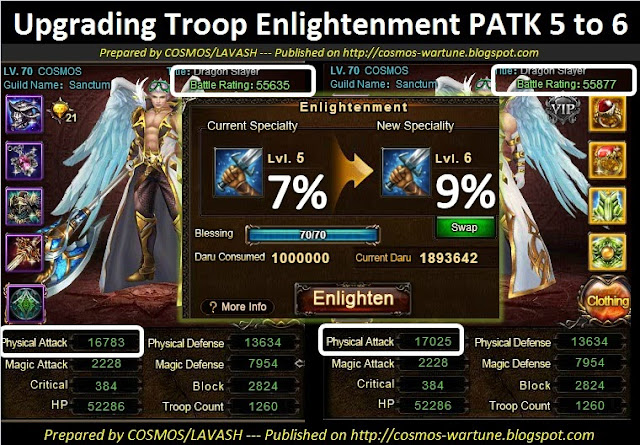