Hey guys, here I want to share with you an analysis and conclusions about making choices when it comes to troop enlightenment. Many of you might already know my original opinion about troop enlightenment, which is to go attack all the way all the time. That is for everything in Wartune when making a choice to always prioritize attacking for the main reason of making more income from the World Boss.

Now I tried to challenge myself on that thinking when I was pumping millions of daru into troop enlightenment upgrade when I noticed the HP Transformation choice. The thing is it said on level 5 that i would get 35% bonus. Now according to the Wartune Wiki I calculated with my troop count of 1240 and Templar health of 6355 that I should be getting something in the region of 14,000 HP additional which was massive.

This I had to compare with my current bonus of ~850 PATK which is also very nice. After a bunch of discussion with few friends and then thinking and counting things myself I decided that in this case the health is too much to pass by and switched my PATK troop enlightenment to HP awaiting a huge bonus to health.

now the HP Transformation was promising me 35% of this which is 13,790 Health, which is what I was waiting for.

Well, you will find the full story in my illustration below. Basically I got only 2,713 Health while lost 848 PATK = a very bad deal, so another million daru it cost me to switch back.

I do not know if this is a bug or if it is working like they intended to, but the formula is pretty accurate which means it is either a bug or the description of the HP enlightenment is totally wrong. 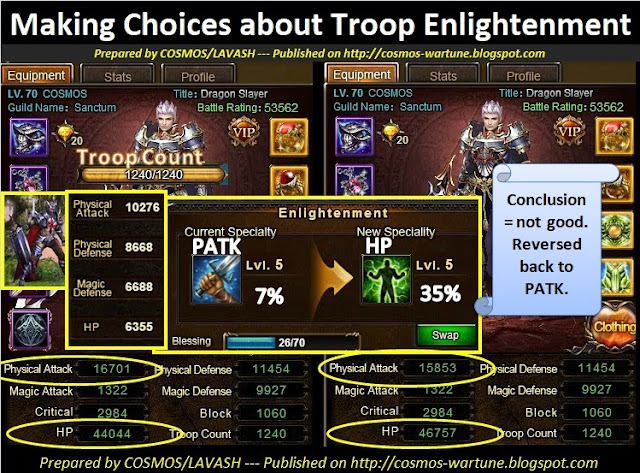