Hey guys today I want to talk about the armor choice myself and few other members of my guild are leaning towards for levels 60-70.  The 50 PvE (Player vs. Environment) set is composed of 4 pieces that can be attained in Garden of Death (50-55) and Tarraton's Lair (55-60).  The 55 PvP (Player vs. Player) set is attained through spending insignia in the arena shop. 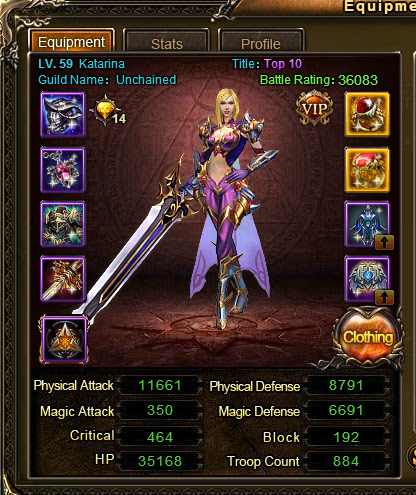 This is my character with the Eradication set (55 PVP).  This armor gives your character 3 addition stats when you have the entire set completed.  The first is that it increases your Endurance by 150 when you're wearing at least 2 of the pieces.  When wearing 3 pieces, you're initial rage for each fight is +30.  The final bonus, when wearing all 4 pieces, is that you ignore 2000 of the opponents MDEF/PDEF depending on your class.

This armor set is really good in PVP environments such as BG, Arena, and Guild Battle.  In all of these area's, the "armor shred" as I will refer to it as, is really powerful and often overlooked by most when determining a player's strength.  It's the reason why a lot of players tend to get this armor set and stay with it for a long time, especially those wanting to farm BG for honor.

Now, lets compare the 55 PVP set to the legendary 50 PVE set.  First off, the reason why the PvE set is better in dungeons, spire, and catacombs/necropolis is because monsters have 0 mdef/pdef, so that stat from the PVP set is irrelevant 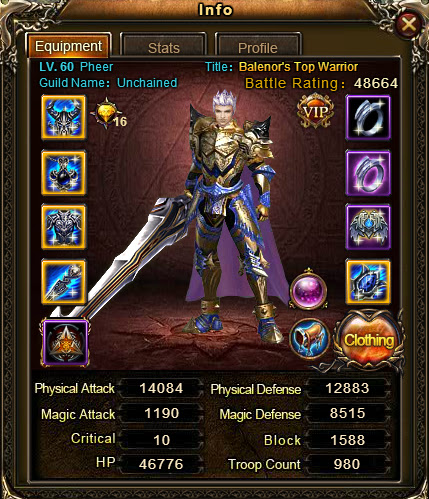 This is Pheer, the strongest Knight on the server.  He has completed the 50 PVE legendary set very recently and has enchanted it fully to +27.  So I guess I should start there.  While the 55 PVP set definitely has better base stats for your PATK/MATK, PDEF, MDEF, and HP, the 50 legendary set has the capacity to be enchanted 9 more times than the 55 set for a total of +27.  So eventually, the 50 legend set gives better stats fully enchanted than the 55 pvp, even though the latter has better base stats.

Next up is the ability to have 4 sockets unlocked instead of 3.  This is an obvious improvement over the 55 PVP set, so I don't feel like I need to waste time talking about it.  4 is better than 3, simple as that.

This armor set also has benefits of having a certain amount of pieces of the entire set being worn.  The first one you achieve at having 2/4 equipped.  The benefit of having this is that you do 300 extra damage for each hit.  So for a Knight, casting a Whirlwind will give +900 to the damage value since it hits 3 times.  An Enhanced Delphic Destroyer will give +1500 damage.  Now this isn't to be confused with adding 300 to your PATK or MATK (depending on your class).  This is true damage.  And for those of you who don't know what I mean when I say true damage, it's basically damage that happens no matter what (if you know what I mean by true damage, skip to the next paragraph).  So lets so that a regular auto attack will do 8490 damage (just a random number).  Add 300 to that number and that is the entire amount of damage that you do in that single attack.  True damage does that value in damage regardless of what your target's MDEF or PDEF value is.

Why is this important?  300 damage doesn't seem like a lot when you're dealing damage in the 10k's.  Well you're right...compared to 10k, 300 damage is insignificant in a single attack.  But lets look at the big picture here.  How many times do you attack in a single fight?  Each one of those attacks gets a 300 damage boost added to it for each hit.  So in a fight where you attack 6 times, that's at least an extra 1800 damage that you have dealt to your opponent, which could make the entire different in a fight, especially in arena and BG.  And lets not forget that this also applies to WORLD BOSS EVENTS.  Whatever you use for your rotation in a WB event, take the number of hits you do to the boss, multiply that number by 300, and thats the amount of bonus damage you do to the World Boss in a single rotation.  And that damage does add up over time, especially in those kinds of events.

The final benefit you get from the 50 PVE set, comes when you have the entire set equipped.  For each action that you do, while wearing the complete set, you gain 10 additional rage per action.  THAT'S INSANE FOR KNIGHTS!!!!  Let's put this into perspective here.  A regular Knight with maxed passive of Heart of Rage (+10 rage for each action) gets  +15 rage for Slasher, +10 rage for a rune usage, and +0 rage for Ultimate Slasher (assuming there are no talent points in Second Wind).  These two skills are generally what the Knights use a lot in fights.  Now, lets throw on the 50 PVE set shall we.  All of a sudden, the Knight gets +25 rage for a Slasher, +20 for a rune usage, and +10 rage for Ultimate slasher (with the same assumption as stated before).  With these numbers, a Knight can run both Delphic Destroyer AND Enhanced Delphic Destroyer in MP's, Spire, Divine Altar, and Catacombs/Necropolis.  This is because the rage meter will fill back up in only a few turns, so after the Delphic Destroyer is used, more massive DPS comes out with an Enhanced Delphic Destroyer and, well, you got yourself a party.

So if I were to make a suggestion of which set to go with for levels 60-70, it would have to be the 50 PVE set over the 55 PVP set, based on all of the benefits that you get with the Legend/Epic status of the armor set.

Thank you for taking the time to read this lengthy article.  Now go out there and farm the stones and crystalloids needed to complete your class specific set.
Posted by Unknown at 9:38 PM