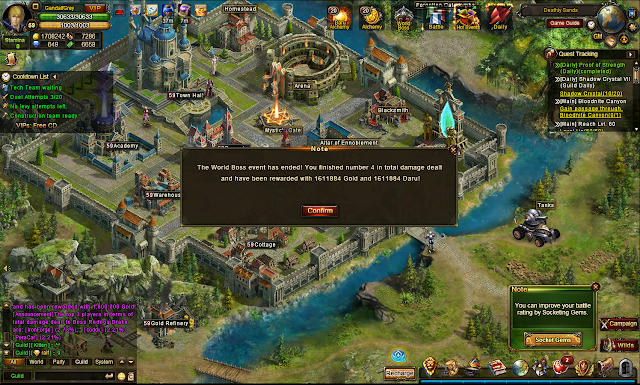 Hey guys, sorry for two posts in a row, but just finished 4th in world boss! My ingame screenie is of my in 5th by .1 %, so I just added this one. I feel great right now, really awesome accomplishment in my opinion.

EDIT: I will add in the other screenshot anyways, here it is guys! :) So here's what I did/used. First of all, I did use a matk pot, and a  matk scroll, but listen, because this is important.

Whenever potting and scrolling, with inspiration, use the pot first because- It is a fixed amount of addition to your stats, and so that helps first of all, but now, when you use vouchers to 50% inspiration, your base stats are higher, so your inspiration does more. I spent balens, because I really wanted top 10, so I was also buffed out to 100% inspiration. For everybody though, after I had 100% inspiration, THEN I put the scroll on, and because my stats were so much higher, it did alot more than if I had put it on at the beginning.

Ok, my rotation is known as the speedy chimp rotation (credits to Redoga, and his video on this.) If you want to go to youtube and look up his video, feel free to do so. The main idea is to get in and finish as fast as possible, so you get less per run, but more throughout the whole world boss, because you are able to get more attacks in. The idea is to start with Thunderer, the do auto-bolt double attacks the rest of the time, just to be fast. This of course is for a mage, and I don't know the knight/archer equivalent, so I apologize for that. What are some of your guys' rotations? Does anybody else use this one? I would love feedback, thank you!
Posted by GandalfGrey at 2:29 PM