Packa-a-Palooza is out for Class Wars week as usual, but I can't say they're deals I'm excited for. Let's give them a look anyway xD 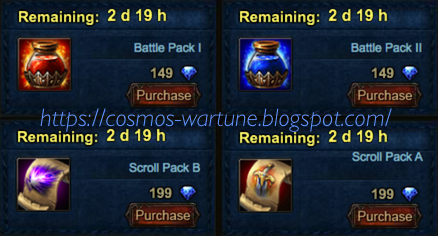 When comparing the prices of these items to Market prices, they're fantastic. If you're really compelled to by pots and, this is the time to do it. At the same time, these are cash items that you can easily avoid paying for just by hoarding up prizes from guild blessings throughout the month.

Admittedly, I've bought some of each of these at some point in the past, but I wouldn't suggest it now. The Epic Miraculous Shards come a terrible rate in the Magic boxes (you'll be lucky if it's even 1/3 of what you open).

The crystaloids are a much better value, but I still think they're mostly for high cash to whale players that want to rush to make the next set of gear. I have a low-cash buddy who caved and bought these for his 60 set, because he said he'd probably have quit of Moonevil boredom if he hadn't. I'm glad he did (<3), but I don't think it's really necessary to cash just to get the 60 set quickly these days. Skeleton keys are much more accessible now (hoard your mount whips, and you'll get them eventually), so summoning in Demon Temple nightmare mode is the better option.

What do you guys think? For young servers somebody has to be the whale that buys these things and gets everyone else to the summoners, right? :\
Posted by Unknown at 4:50 AM