Hey guys, let's talk a little bit about getting last hits on the World Boss. First of all I guess everyone agrees that its cool and a great experience, but I also wanted to get a little deeper into it for better understanding. 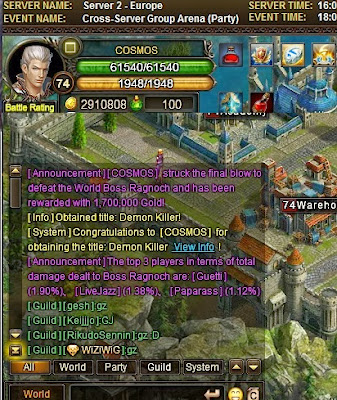 To start with we can agree that if you are not alive at that specific last moment of the WB fight then there is no chance for you to get the last hit kill so one of the first things you can do is see how long your fight takes because you certainly want to be alive but you also want to take as much gold as possible.

The length of time depends on which skills you are using and also on the combination of attacks, etc.

For me, with my skills and AFK mode I have tested and I use the health bar decoration to know when I should start my attack and I show you here on the picture below that I have to click on the WB not earlier than this black line for myself. So I suggest you also figure out your line.

This way I get most of my attacks through so I collect as much as possible the gold and I have a chance for the last hit.

The above I do when on AFK mode, however, if I feel like increasing my chances slightly then I take manual control and use brutality EDD on the last bit of it, but this does sacrifice some of the gold income.

The above is also only true if you finished the previous round earlier and you are alive and waiting, of course if you finished late you have to rush to WB, but remember you have this waiting period when you are dead so don't attack the WB if you know that the time of your attack and this waiting period is too long and WB will be dead - in this case, if you wanna have a chance for the last hit just stand around and wait for your attack line.

Lastly I want to put it out there in the open if it is worth going for the last hit or not. You see there are like 300-500 people attacking the World Boss every time and on top of these also their troops so that's more like 900-1500 attacks on the World Boss, which is why there is so little chance for anyone to have that final hit and often I am certain it is done by the troops rather than the persons. Anyways my point here is that let's say your full round income is 100,000 gold and if you stand around waiting for the correct timing and take care to do one strong hit let's say in that round you earn 50,000 gold also considering the time lost waiting then actually i would argue that you are better off grabbing this extra 50k gold every time and in 20 days you have 1 million gold rather than trying to go for the final hit. Just a thought - think about it.
Posted by Unknown at 10:56 AM