Hey guys, as events are very important in Wartune especially for free players or non-cashers to get special items I have made the below illustration of the Wartune October 2013 events and the rewards that you can get in it, i.e. the special items: Dreadful Scraps and Monster Scraps, so check it out below and make good planning so that you benefit the most.

And if you see any mistakes just let me know and I will correct, but hopefully there are no mistakes :) 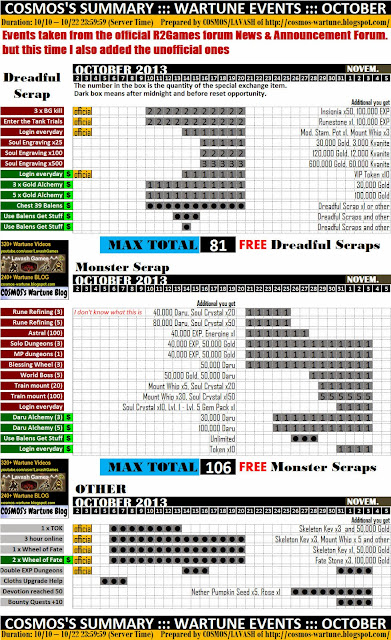 Phantom Yeti
The guardian of an everlasting land of ice, he is a loyal companion to one and only one master… he may be able to predict the future.
Attributes: +20, Attributes Max Level: +10

Razor Dragon
Often used by only a select number of Dragonriders, this beast is difficult to tame and does not willingly submit to a master.
Attributes: +30, Attributes Max Level: +10

Sura’s War Elephant
A creature bred for war as commanded by the empire’s ruler as part of an elaborate military plan… brutally put to an end by the elephants themselves.
Attributes: +30, Attributes Max Level: +10

Grim Reaper Morph Card
Transforms your outward appearance to that of a Grim Reaper, lasts 1 hour.

Monster Scrap
Obtained from the Pumpkin Pack, can be exchanged for useful items.