This is Jarod aka QueenAmadala from server s1 bringing all the greatest info from the brand new patch 2.1

Bound Balens=  Really good change over imo.  I had almost enough vouchers to get level 6 farm and with the conversion not only did i get level 6 and level 7 but still have about 250 left over.

The entire thing is a Huge, cant emphasize enough Huge change.  Many have thought about quitting because it scared them how much it changes the game.

I will start with Sylphs, you can have 3 sylphs and multiple of 1 kind.  At the Moment there are 2 one being Iris. 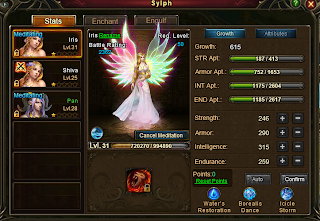 And the second being pan. 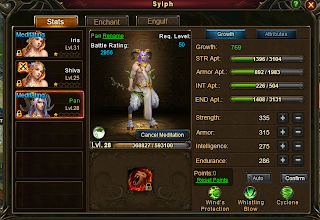 They both have different abilities and only one sylph can be used at a time.  They unlock a special ability or something at level 55 it looks like but nobody i know has made it there yet.  The way to unlock these pets is to beat and obtain through the shop 60 monsters to unlock it or one iris is obtained through the log in daily rewards.  To level you just gain xp all xp gained for your player is also gained for your sylph.  Everything we have seen counts.  Mpd,spire,campaign, necropolis, bounties, daily quests and even letting them sit on your farm increases their stats.  Also your sylphs stats do increase your br so the higher you make your sylph the better it makes you as well.  ( Just Found out before posting, that the sylphs also have rarities as you can see my pan is a green rarity and have seen a blue, we are working or trying to find best way to get them.)

Here is a quick look at the slyph arena and what exactly you can win for daily and weekly prizes. 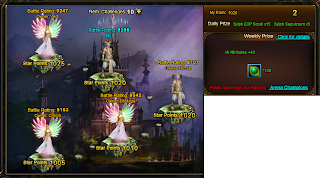 As you can see I am currently ranked 2nd which to me feels like a huge accomplishment.  After these first reset i was rewarded 15 sylph xp scrolls and 5 sepulcrum(these increase your stats like whips for your pet, only you cant choose the stat it will increase it is random.)

Next I will talk about the academy, many people wanted to know about the advanced academy and all I can say is it takes millions of more kyanite to max.  One guildy said he had 8 million and wasnt even close to maxing his out.  It is on the 2nd page in academy and looks like this.  There is also a cap on level for advanced depending on your overall academy level one guild mate said its 40 for anyone in the 60s and of course Kessar who has level 80 academy did get level 80 patk so 80 is again the cap for highest players. 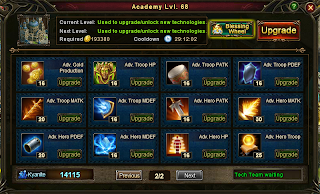 Finally on the first day I can say that BloodFang the first WB has been taken out of the game ( also double hitting much harder to do now and there is no buffs, just spawn early), and that guild towers effect the battle significantly.  If you own all 4 towers your team does 2x damage and their team does 0 damage.  Making our first gb last about 4 minutes haha.
Posted by Unknown at 12:34 AM