Hi guys, with the last update, we can now see how many bosses are left in each MPD!
With this new feature, we can check how many bosses currently are in Lych Lair.
Lych's Lair basically has 3 bosses and if you are lucky enough, you can get up to 3 extra bosses which each one gives you 1 Dragon Essence!


Steps how to catch 6 Mini-Bosses in Lych's Lair

As everyone knows, each MPD allows 4 players to join at the same time and each player has 10 free Bullhorns which makes it a total of 40 free bullhorns per day!

The idea is as following:
Here is a picture that shows you how many bosses are there in the Dungeon. 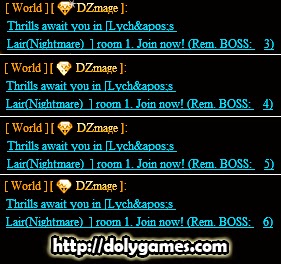 As we can see on the picture above, when the Fast Invite says: (Rem. BOSS: 3), it means that there is no mini boss because the 3 bosses are the usual ones.


Optimize the use of your Bullhorns!

Once the 3 others join the MPD, the one who found the 6 bosses also needs to quit and join back with the Rewards Button checked so he can get the rewards from all 6 bosses.

I hope this will help all the level 70 players to earn more Dragon Essences each day especially for those who are already level 80 and need to max their Dragon Soul so they can Class Advance :)

There is a better way to check how many bosses are there in any MPD that has mini bosses like Lych's Lair and Void!

Instead of wasting our daily free Bullhorns, we can just do the following steps:

Big thanks to Siarra and BadSector for explaining me the trick. Also big thanks to Limbeck for helping me make the screenshot.
Posted by Unknown at 1:10 AM