Hey guys, Cosmos Mage at Kabam Wartune is growing well and I want to share with you some knowledge / tips about being around level 50.

First up is the first sign that you are doing well and that is getting MVP title in the Battle Ground. So for all those people asking me "am i strong enough?" or "is my BR good enough" this is one of the ways of answering yourself the question. And yes I know some rooms in the BG in Wartune can be harder and some easier but just getting MVP one time is a good sign that you are doing good. Here is the picture of my first MVP.

Next up an update on the character and advice. So I am already Elite Warrior and growing honor steadily. Doing much better in the Battle Ground as I get stronger. I did get to level 54 - it is very hard not to level up, but now I am going on a serious experience diet so I don't level up to 55 just yet. The main problem is coming from the catacombs and summoner in the MP dungeon. You kind of have to do catacombs because the tokens are needed to synthesize the 50 set or make legend the jewelry. And if you want to get the loids and the legend stones faster you kind of need to do the summoner.

Now my Kabam Wartune server is an old server, so I can't find anyone who wants to do the 50 summoner, so my growth has been slowed down by this, but still from the few times I did do the summoner there is good experience coming from those fights as well, so be careful not to level up from this if you are holding level.

Got my first level 50 legend item. I picked the hat because I already invested into max enchantment of the 40 set staff and I actually didn't want to lose my +200 damage from the 2 pieces of the 40 set. But my next 50 item will be the body armor since that's my weakest item now. Then the staff and then last, the necklace since health for me is last priority. In the meantime I might have enough tokens and legend stones to make one of my jewels into legend. 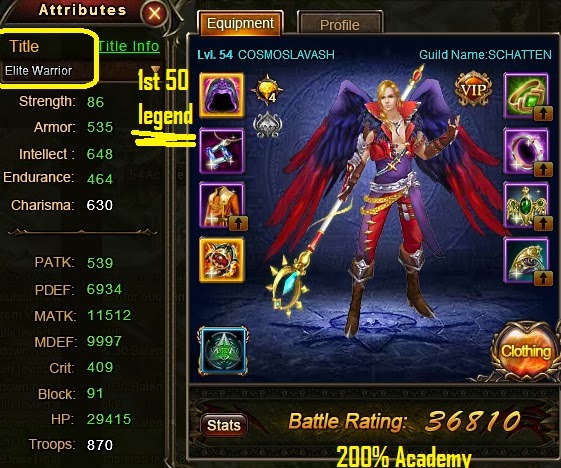 Above 200% academy buff is on but the academy levels are low since I am playing less than a month and kyanite is limited.

Last, I want to remind you that item refinement in Wartune is very important, but can be difficult if unlucky. Especially since we get now refinement locks from jewel event. See below I made very nice refinement of my new 50 legend hat, but I also warn you that it is very luck driven. I spent absolutely all crystals I gathered since the start of the game and I could not get that last attribute to become armor or intelligence. Very unlucky and more than that now i don't have crystals for any other item. The +10 crit is not terrible, it will help me with World Boss earnings a little bit, but for this character it is very wrong because I use Will Destroyer for PVP. 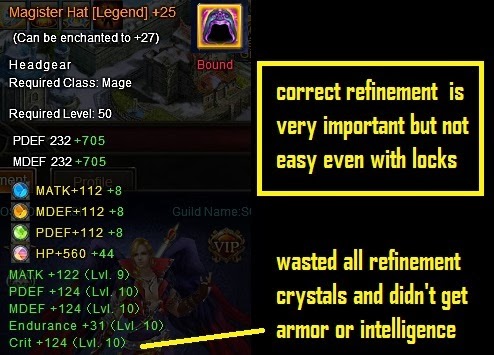