Hey guys, so I leveled up to 74 :) *victory dance* and I am sharing with you both some stats and pictures form COSMOS as well as some thoughts and advice. 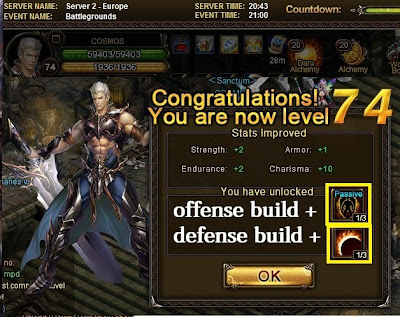 Level 74 is a very interesting point for knights I think because you are getting to have more skills points than needed for either the offense build or the defense build. As I show you in this picture in my offense build I was able to get the passive Tenacity at level 1, which is wonderful as it reduces my damage received as well as the critical receive rate. And on the defensive side it is possible on level 74 to get intercept level 1 which allows you to have both intercept and apollo shield which is especially useful when fighting in the Tower of Kings (for those who do not know a knight standing in front can intercept the front enemy making it impossible for them to cast anything strong at the start and then it is a good idea to cast a blood rune and if you have some basic clothing then you should have enough rage to cast apollo shield straight away, which is all very useful for your party). 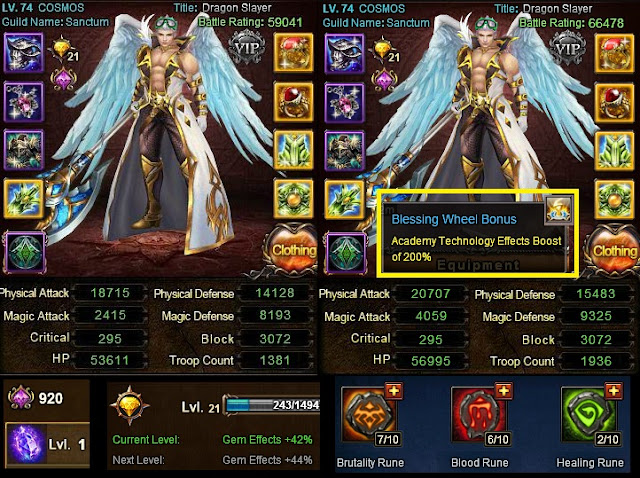 On the statistic side of things as you can see un-buffed I am up to 59k battle rating, still with 3 items from arena set 55 and the level 40 legend rings, so indeed a great room for improvement still is there. However I have already made a huge step forward and already have 2 items from the level 60 pve set legend (see my picture below on the inventory items) and I almost have enough to synthesize the last 4th item, which means that right before the class wars i except to have the 60 pve set which greatly increases my chances in the class wars. So the next couple of days will be rather interesting for COSMOS and is a big step forward.

Of course we also have the new Wheel of Fate which gets invested into the Brutal Edge skill which also gives you an aura at level 5 I believe. this also helped in having extra HP and attack. I have it at level 1 as you see in the picture above and over time can imagine having level 2/3 but probably not much higher as that is very difficult for non-cashers due to only 1 spin per day.

So some thoughts - level 74 is where I will stay for a while as I got a really good advice not to pass over to 75+ because then you for sure will be dealing with the top people in the game when it comes to Battle Ground and such. And this is also in anticipation of any possible game mechanics changes, i do think it is not a good idea to be in the last 5 levels so 75 to 80 - I want to avoid that bracket as much as possible until I get a lot stronger. So I can focus on raising holy seal and other talents, which is also very much needed

I am also very curious about how much stronger I will be with the 60 pve set. I do worry that it will damage my WB income perhaps due to starting with lower rage (the higher the rage you start with the higher the WB income tends to be).

I also still strongly advocate for using sniper and determination (so critical build) for fighting WB - you definitely make a lot more money than using WD build. Again luck goes to archers as they only need 1 build, but mages and knights must adapt for higher income. On AFK mode with the new academy bonus I can make up to 125k per fight from the WB - usually around 100k. I can probably make more if i do it manually but i am very tired of the same thing for many months up to 3 times per day, so I stick with the AFK mode.

Lastly I think R2Games is doing an amazing job at trying to convince people to buy balens. Really good job - I have to work hard not to buy and stay a non-casher. As some of you have asked why I stay non-casher I can answer that it is not because I don't have money - it is because I find it more interesting and challenging this way and I think I am doing pretty good so far :) and moreover it is a very good lesson in training patience and not falling for greed. 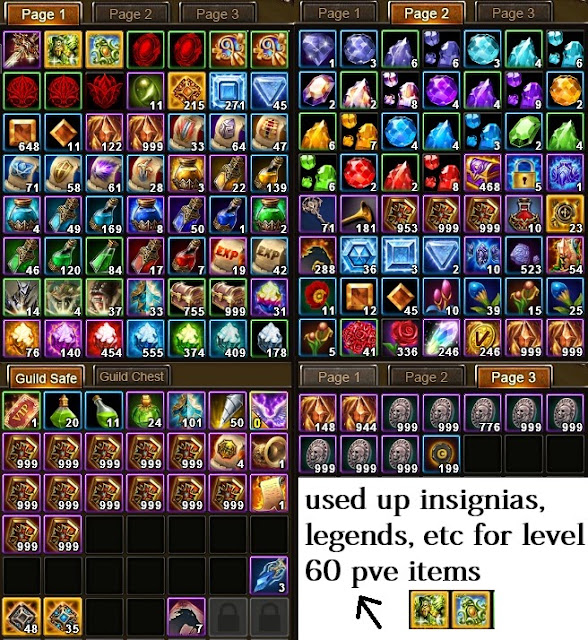