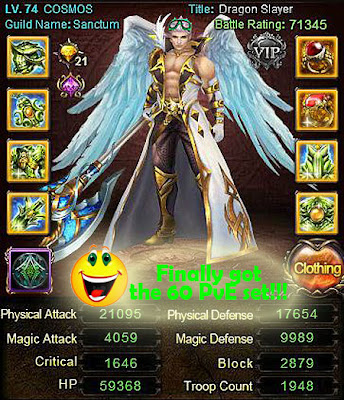 Hey guys, after a long time I finally got the Level 60 PvE set and also made it legendary. Especially the last Wartune update helped a lot as only one mpd is now needed per day - I just could not find the time to do 3 per day and often missed them in the past. Anyhow, sooner or later, as long as you don't quit, you will get what you want in the game :) and for me this was a big step forward - definitely a huge milestone for COSMOS in his life in Balenor :)

The 60 set is of course a lot stronger than the 55 set but only if it is made into legendary and that should be the target because that extra gem slot and, even though very expensive, but the extra enchants all the way to +30 do help a lot and as you can see my Battle Rating is now 71k without any pots but with the academy buff of 200%. Still, I would not have imagined that I could ever get to 70k+ BR as a non-casher so for me this is a big achievement and I clearly got a lot stronger especially on the offense side where I can chain hit EDD and DD (the 2 delphics).

The way you fight with the 60 set is totally different than the mentality of any of the arena sets. I must say I am not yet used to it and it will take some time to learn and get a good feeling about it. What I mean is all the rage counts and knowing exactly what you will have a few moves ahead. For example a slasher now gives not 15 but 25. Auto gives 20. My ultimate slasher increases rage by 7 and the whirl wind does not take away 50 but takes away 30 (minus 50 plus 20). So all very strange numbers to get used to and quickly add up in the head when planning future attacks.

When it comes to our dear WB then the income indeed goes up due to the large rage gain, but here I can already share with you what setup i use for consistent good income and that is i remove completely the ultimate slasher and i keep only slasher and the 2 delphics. This way COSMOS, on AFK mode, hits both delphics in each WB round and does also double attacks and I am getting something like 115k income now compared to around 90k with the arena set, so that's a roughly 30% increase of income which is fantastic.

Well first of all I got relaxed :) and probably not going back to the moon dungeon as I am sick of it, but I did start doing the level 70 dungeons like I did Samsara today you can see that video on my YouTube soon. And I think the next steps will be to start collecting crystals and stones for level 70 already as my rings are still level 40. Now don't look that bad at the legend 40 rings - actually if you check they give similar health with the extra gem (health) that they have compared to a regular 70 ring, so it is not bad at all, but i have to start gathering for 70 rings but also legend not regular and since I do love the rage reduction proc on the rings i will only change them together so i can always have that proc, so i have to save up for 2 together.
Posted by Unknown at 3:29 PM