Hey guys! Level 73 here I am! :) and I am still unsure if it is a good idea to climb up or not. For example there are less and less people that I can plunder :S that's not so good, but then again I am so tired of plundering in Wartune so maybe i don't care at all :)

There are some some additional stats like +2 strength and endurance and a tiny +1 of armor and +10 of charisma which is good cause in 10 levels that's like +20 strength which is as good as 1 casher mount :)

And then there are bigger benefits like earning more experience from the guild tree, earning more money from the town and having a higher level of troops and having smaller chances of the 5% penalty of fighting a stronger opponent in the Class Wars. 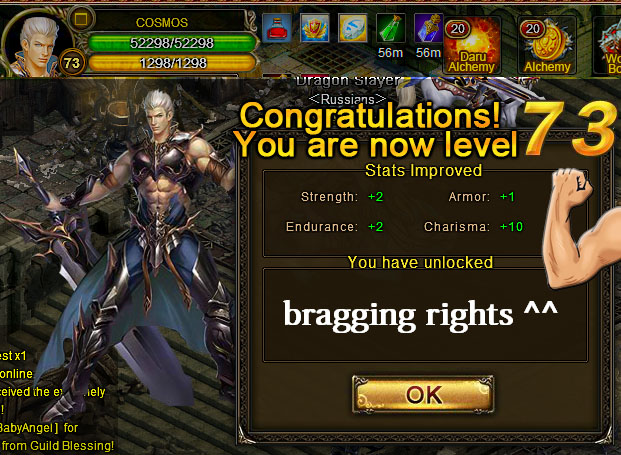 So I get very often questions about all these equipment sets so I want to explain the following:

The Classic Path of Equipment upgrade:

Why? Because the insignias are very easy to gather - much easier than the legendary stones and crystals and the levels go up so fast that it is not worth getting a lower PvE set.

By the way for those who don't know PvP is player vs. player and PvE is player vs. environment. The reason Arena set is called PvP is because it gives 30 rage straight off which allows you to smash players fast. But in long boss fights (environment) it is better to have the +10 range gain of the PvE sets.

Ok that said due to the fact that not all people are dedicating the same time in the game there are alternative paths:

If you are not an active player:


If you don' t play much and you don't do all quests every day then gathering for level 60 set is too difficult or will take a long time for which a lot of people might not have the patience and therefore I recommend that you go from 45 arena set directly to 50 set legendary or to 55 arena then 50 legendary depending if you have a lot of insignia or not.

Furthermore, because not active players are behind and everyone active are in front usually they even can buy the level 50 legendary stones from the guild shop which are not as expensive as the 60 stones.

So again, if you have or can get a lot of insignia then go for the 55 arena after the 45 - otherwise go from 45 directly to level 50 PvE set and make it legendary (that also applies to your rings and jewels).

When moving to Level 60 PvE set from 55 Arena Set:


So a lot of people make mistakes here as well and ask me all the time silly questions :) When you are making this move there is a specific best way of doing it. The 55 arena set is giving you, when all 4 pieces are on, a 2000 armor ignore when you are attacking - that means that you will hit harder. Now if you replace one item with a level 60 let's say armor or anything else than the weapon then you will lose this 2000 armor ignore and your damage or power will go down so you will hit weaker.

So the only one item that you must replace first is the weapon because then you will lose the 2000 benefit but you will gain back a lot of attack from the level 60 weapon and you must also do this when you can make it legendary straight away - just a regular level 60 weapon is no good. So the legendary 60 weapon will boost your attack and compensate for the loss of the 2000 armor ignore.

Against monsters with no armor such as World Boss you will actually hit harder, but against people you will not see a huge chance because you lose and you gain.

From this point onward, once you have switched your 55 weapon with the 60 legend weapon you must save up for all other 3 items and not replace them 1 by 1 because you don't wanna lose the 30 rage bonus. The 30 rage bonus actually helps hugely in getting a lot of money from the World Boss. And furthermore, you always have a very small chance that you find a level 60 item from dungeons, so keep gathering until you have enough for all 3 others (900 crystals, etc) and then upgrade them and once they are upgraded then replace the 55s so that you end up with a full 60 set. For the 3 items having them legendary straight away is not required. You can upgrade to legend as you go.

I hope I finally cleared out a lot of confusion that people have about these things and so if you like this article please Google + it on the top right and put comments if you want :)