Hey guys, so in the forum they posted the Class Wars Modifications, which they say is done to make things more balanced and nice, so let's go over those:

1) The matching system has been changed to put those people against one another who have similar points.
>> cool.

2) Points are no longer growing from small to high but points are uniform for all rounds giving out 270 points for the one who won and, as usual, half of that to the one who lost.
>> nice. 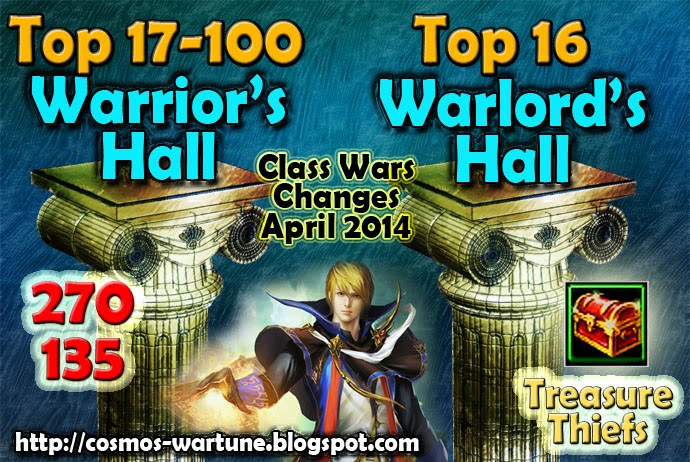 4) If nobody is dead in 3 minutes now the winner is the one who dished out the most damage.
>> The only downside to this is that this is to the disadvantage of all the defensive strategies like the defensive knight and also those using Iris and healing up or those using the Healing Rune.

6) Wagers are placed only on those from the Warlord's Hall and are now placed in Glory Crystals (which can be bought with balens for wagers).
>> Not sure if this makes any difference, but it seems the wager return rate might have been changed back to 1:1 but i don't have a confirmation on this yet. If you know please put down in the comments.

General Concept) Anything being equal the one with the higher Battle Rating wins (example: same points earned)
>> fair.

So what do you think about these changes? Share your opinion in the comments.

And lastly, here is the video of my Class Wars run with my Knight, check it out: