M3shyS here to bring you a short post, I will do a huge one on the weekend describing every single aspect of  'Earn free Balens' and hopefully it will inspire you to use it as well.
(r2 servers only)

Anyway,  I think we all have spotted the in-game message saying: 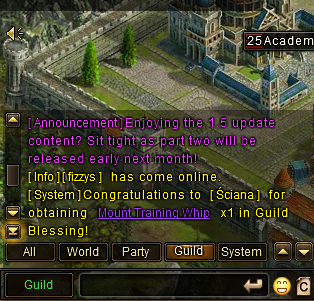 This is a great sign. The new update is about two weeks away!

Just as this comes up, I'd like to tell you about some of the great ways of earning Daru:

Also, I'd like to have a follow up for the Knights v Angels post, so here:
Knights are seem to be better from me as a knight, I thought angels could sitll be better, but to be honest, you soon realize they die in the first few rounds normally, and las thte same time as a knight, and do not have an extended healing time other then a few rounds in stuff like Catacombs they die quickly.

I was having difficulty beating Yaros, using knight's he wasn't so hard, but the angels were wiped out, trust me I tried all toops level 20+ apart from hunters, lancers, priests.

Knights seem to be the way-to-go for any class; also,  the new troops, one similar to a knight (or is it a lancer type ?) and one mage, but it seems those mages would be more powerful and more useufl then angels.
They are unloackable at level 50 baracks, but that does not mean save now if you are not level 50, as you want to get campaign and catacombs done so keep on upgrading your troops.

-M3shyS
-Look out for a new post on the weekend about Earn free Balens!
Posted by CrEaTiOnE at 4:01 PM