Every week 8 most powerful guilds fight each other in Guild Battle. Guild battle consists of 3 rounds, one round on Monday, Wednesday and Friday. Rewards are insignia, honor, mount training whips and soul crystals.

Each guild can assign maximum of 50 people to guild battle. Participant list can be modified by Guild Master and Assistant Guild Masters.


In guild screen, click guild battle and then participants.

If you can’t really fight in guild battle, do not participate. There is always more people willing to get in the battle than there is spots. Guild needs fighters, not someone to stand and sit around doing nothing. Usually idle players also are getting kicked from guild battle so there really is no point in getting in for sitting at spawn. 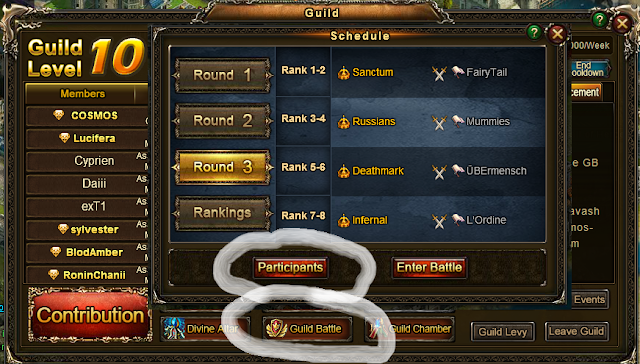 
Guild spawn points, from where players start the battle (and where they end up if they die in battleground) are at the opposite sides of the guild battle map. In front of spawn points there are guild Ward Towers, also known as “Main towers”. There is also 4 small towers. North West, North East, South West and South East.

Goal is to take and hold all 4 small towers AND/OR destroy enemy Ward Tower.


Respect your enemy. Do not use foul language and behave well. Do not kill people who stay inside their spawn, since it’s considered as bad behavior.


Each guild can have max 4 players in one individual fight. Fights can be anything from 1 vs. 1 to 4 vs. 4 or any other combination depends on how many people join in the battle. It is not really possible to arrange specific fighting teams or set up specific formation for random battles.

If you die in guild battle, you will be transported to spawn area and can continue fighting after cool down. 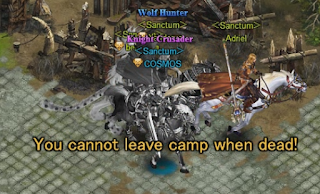 You will use HP in guild battle, so make sure you have enough potions. If you don’t, you end up in battle with less than full health and that means losing, for you and your possible battle mates.

Taking and defending a small tower:


Go to the tower, kill possible enemies and occupy tower by clicking it. Then click the tower again and defend.  Each small tower can be defended by max 4 people. If tower is attacked, all defenders will be drawn to battle instantly.

When defending a tower, stay inside the blue circle and do not move or attack passing by players. If you attack someone, you stop defending the tower. IF you move, you might get drawn to a battle even you did not try to attack.

Most guilds have rules about tower attackers and defenders. Usually towers are defended by relatively strong players and low battle rating & low level players should not defend or attack the small towers unless told to do so by guild master or assistant guild masters.

Keep up communication while defending tower. If you get attacked, tell it in party chat. If you are about to lose tell that too. If you have too few defenders, ask for more in party chat. If you are safe and well, just announce “NE/NW/SE/SW safe”. Most important is that others know where they should be and where all is good and where help is needed. 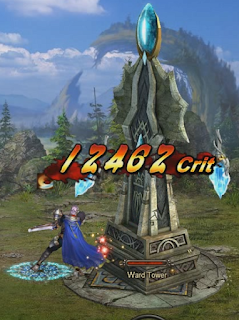 Ward towers can’t be defended like small towers.  Guild can arrange a bunch of players harassing and killing enemy who tries to attack their main, but defending the tower like small towers is not possible.

Enemy ward tower is attacked by clicking it. Usually it is easiest to click the top of the ward tower and that should draw you in to a fight.

When fighting ward tower you also have your troops, it is actually very similar to fighting a world boss. But in this case, you lose all troops when they are killed and need to buy more. Because of this, it is advisable you remove all but 1 troop before attacking a ward tower. You can remove your troops by clicking your troop icon, then move all troops away and assign only one troop back. Then you only loose 1 troop per time you hit the ward and not all of your troops.

Attacking a ward tower eats a lot of Health Point potions. Make sure you have enough or fight without.. but if you fight without HP do not join any other battles there are going on in the battle ground and fight only the ward tower!

Communicating during a guild battle:


I strongly advise you to keep “Party” chat open all the time, since that’s the channel where GM and Assistant GMs usually give the instructions about battle strategy. They do not have time to PM 50 people individually!
Guild Master and Assistant Guild Masters make the strategy; your job is to do as told to. If you refuse to do as you were told to, you will ruin the strategy and your guild will probably loose. Loosing means less reward for all of you. Guild Battle is teamwork, good teamwork is half win!

GOOD LUCK TO YOU ALL !